TODAYS SPECIAL-DAILY-NEWS-29-09-2016
29 September: World Maritime Day
The World Maritime Day is observed across the world on 29 September to highlight the importance of shipping safety, maritime security and the marine environment. Several events are organised to mark this day by the International Maritime Organization (IMO), member Governments, maritime industry etc. 2016 Theme: “Shipping: indispensable to the world”. The theme focuses on the critical
Read more » 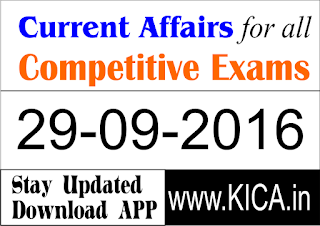 Be your own coach with KICA.
An initiative of kiran prakashan prv. ltd.
Install the app to belive IT.
Each Exams @rs.1/-ONLY with
KICAonline.com 9762005579

KICA-Making Landmarks in TEST SERIES after 50 year's trust in BOOK Publication.
(A Classroom Coaching of Kiran Prakashan Pvt. Ltd.). Each Exams @Rs.1/- ONLY. with
www.KICAonline.com. Install the App to Believe it. 9762005579